My wife, handier with money, loves leaving the num lock on. 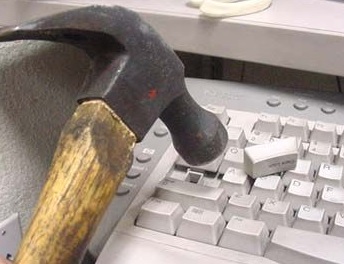 I, handier with prose and software coding, want it off. (In fact, I always set the BIOS default to off on any computer).
Our kids could go either way, and have complained about it not being “right” when they switch user.

But since I moved our family PC to Windows 10 a couple months ago, I noticed it remembers each users’ last num lock setting.  Hey cool!  …But Google admits no knowledge of this feature. Am I just the lucky first guy to notice?

Regardless, this is another fine UI touch that Windows has invented in the last 5-10 years.
(Now if OS X would just get off their laurels and notice/copy them — oh hey Aero Snap anyone?)

I would recommend VideoPad heartily if NCH didn’t crap on their own work.

But unfortunately “free” needs those scare quotes, because its installer just behaves badly.  Here’s how, and my answer to each:

It’s a shame — VideoPad has a paid premium version with more features, and I would recommend it heartily if NCH didn’t crap on their own work.

Possible alternative: it looks like <a href=”http://portableapps.com/node/19682″>you can make VideoPad Portable.</a>  That certainly keeps it clean.

Witness white grow green
soon the fuse, the unseen
not shorter but stronger.
More imminent but longer
is the time when finally,
after the lively sparks have pushed (burned?) their way through the hard outer shell the explosion happens showering the landscape with itself,
living shrapnel,
until at last,
it is again
buried in the soil.

I’ve added a Redirect to keep the old feed working, but some readers may not handle a 301 (and it may disappear someday too!)  Please update your RSS feed to https://blog.throbs.net/feed/ !

Now, with all this effort to build a platform, expect me to climb it and start sharing again!

It’s been a long time coming, but Go Daddy finally forced my hand by upgrading my dasBlog install to death.

(FYI: Go Daddy no longer has web or email support – chat or phone only.   Because people don’t want options.)

The phone rep at least got me to a useful error and told me they finally moved off IIS6 (Windows 2003?!).   When I figured out dasBlog can’t run on IIS7 (why not 8??) without a rebuild, it was obviously time.

SO, here I am rebuilding into WordPress.  Content is in, but no skin and many links are broken.  Sorry for the mess :T But onward!

Update:
Other than some rough design edges, I’m done! Thanks to Reeves Little‘s tremendous how-to Migrating from Dasblog to WordPress, and Bob Craven‘s illustrated supplement Hello WordPress, Good Bye dasBlog, it was quite straightforward.

And to be fair, the Wordpress world has great addins for absolutely everything I’d’ve otherwise Macguyvered together: importing, HTTP redirection, link checking, contact forms (and those are just migration-related). I’ve built a lot of WordPress sites for other folks, but now the cobbler’s child finally has shoes too!

These are a few of my favorite things,
…that Google has yanked out from under my feet.

And let’s not forget Gmail’s Activesync. (That’s why I switched to Outlook.com, and happily).

Why are geeks still trusting Google? We should know better by now.

Comment spammers have taken over (again). Apparently, Captchas are all the way broken these days…

So until I get moved to a new platform (again), no comments outta you.

With Google Reader now buried, and
my preferred reading app NewsRob with it, I figured I’d share how things shook out in my quest to keep reading…

I confess that I regularly imagine and spend too much time trying to find the mythical perfect solution.

On the web service side, I tried and found:

For mobile apps, I tried:

My friend Sean McCabe (who really needs a blog!) enlightened me that GReader supported Feedly, and that Feedly also imported Reader’s Starred Items. I have 6 years of Starred Items that I didn’t want to use, so that sealed the deal: Feedly+GReader it is!

Feedly’s only cons: missing +/- zoom, and themes only cover navbar — I figured I can handle that… But I just remembered the Chrome extension Stylebot, which can inject your own custom CSS into any page. I’ve just used it to create a black AND zoomed theme for Feedly. Perfecto.

Google is shutting down Reader.

6 years ago, I made a lengthy search and was happy to find it, and I happily use it daily for 454 feeds on various computers and devices.  So I’m not sure what comes next.  Everyone seems to be sharing lists or gimmicks of Reader alternatives, but they all look like steps back to me.

(Hey everyone who’s talking up Feedly — does this really need an installed app now?)

For now, I’ve left a flower for Reader at the The Google Graveyard.

Beyond that, my strongest next inclination is to stop trusting Google with my stuff.